People working together toward a common goal usually can get things done much faster and more effectively than individuals working alone. Because of this, and because of the constant change happening in the way organizations work, the way they are managed, and in technology overall, teams are becoming a major strategy for companies around the world that want to do business in a more efficient way. Personally, I enjoy participating in teams because I love helping people and I love learning from them. I guess you could say being on a team is in my sweet spot.

Now I have a couple of questions for you: How many work-related teams (project teams, virtual teams, management teams, etc.) are you on right now? And how much of your work week would you say is spent doing team-related work? If you’re like most people, it’s likely you are on five or six different teams and you spend about half your working hours in a team setting. And if you’re in a leadership role, the higher your level, the more time you spend in teams.

If you’ve ever worked on a high performance team that had a skilled leader, you know it can be  a powerful approach for goal accomplishment or problem solving. But what if you’re on a team that you know is not a high performance team? You’re not alone there, either. If members of a team don’t have a shared purpose, if they are unclear about their roles or the team’s goals, or if they aren’t accountable to each other, it’s hard to get anything done. What’s more, if the leader isn’t proficient in the skills required to successfully lead a high performance team, the team is more likely to fail than to succeed.

So if you’re a team leader, how do you give your team the best chance of success? It’s about knowing and understanding the characteristics and development stages that make up a high performance team.

The 4 Stages of Team Development

When a team is first put together, the first stage members go through is Orientation. They have high expectations but are not yet informed as to the goals of the team or the roles each person will take on. The team leader must provide structure while building relationships and trust.

The second stage of team development is Dissatisfaction. After the excitement of joining a new team with intriguing possibilities, members may find themselves discouraged and frustrated with the process and with each other. The team leader’s responsibility is to clarify the purpose and goals while recognizing small victories and positive behaviors.

In stage three, Integration, things are getting better. Team members work together more effectively and trust among members increases as they learn to support each other and collaborate. The leader may begin sharing leadership responsibilities but must continue encouraging people to talk openly, catch each other doing things right, and work on their decision making and problem solving skills.

The biggest challenge of the fourth stage, Production, is for team members to sustain their high performance. Morale and trust among members is high, as is the quality and amount of work the team is producing. At this stage the team provides its own direction and support and the leader is there to validate members’ achievements. Everyone participates in leadership responsibilities.

Leading a high performance team is a big job, but it doesn’t have to be overwhelming. For more help on keeping your team on track toward success—and finding your sweet spot as a team leader—check out this blog post by my colleague David Witt. It features great tips from Lael Good, our company’s director of consulting services and coauthor of our new Team Leadership program.

One of my favorite quotes is “None of us is as smart as all of us.” Two of our company’s cofounders, Don Carew and Eunice Parisi Carew, came up with that simple truth when they coauthored our team leadership program. It’s one of the basic tenets for building and maintaining high performing teams.

In a similar vein, my pastor friend Erwin McManus states in his book The Last Arrow that we are meant in life to live in community. “Whatever you do, you need to find your tribe. . . . When you surround yourself with great people, it elevates who you are. If you want to have great character, surround yourself with people of great character. . . . You will become who you walk with.”

So think—who do you surround yourself with? Who do you walk with?

Over the years, I’ve written a lot about servant leadership. I was recently reviewing Ken Jennings and John Stahl-Wert’s book The Serving Leader (Berrett-Koehler, 2003 and 2016) when I realized how much I like the term serving leader—it makes the point that leadership is about doing something, it’s not just a philosophy. When you are serving, you are taking action.

In my recent work on servant leadership, I’ve been focusing in on three actions every leader can take to serve their people more efficiently.

The first action is about Presence. Be present when you’re with your people. Focus directly on them—not on the next meeting, or the call you need to make, or the text message that just came in on your phone. Don’t let distractions take you away from a living person who is right in front of you. As a serving leader, you need to listen with the intent to learn, ask questions for clarity, and offer the support and direction your staff needs to be able to perform at their highest level. Each person has very different needs, and as a serving leader it takes your concentration and attention to be truly present with each individual. In this 24/7 world, this skill takes practice and commitment.

The second action is Acceptance. Serving leaders look for and build on the strengths each direct report brings to the job. And, realizing no one is perfect, they also identify weaknesses—areas where they might be able to help the person learn and grow. Helping someone develop new skills is perhaps the ultimate act of serving. Accepting people as they are and paying attention to both strengths and weaknesses allows serving leaders to set team members up for success, which serves not only the individual but the entire organization.

The third action is Creativity. Leaders work with teams made up of many different personalities and temperaments—and when you add the complexity of multiple generations in the workplace, the job of managing people can seem overwhelming. Some may see this as a challenge to be managed carefully, but the serving leader sees it as a chance to be creative and invite different perspectives to each project. Magical things can happen when different voices and opinions are shared in a trusting, collaborative environment. It brings about something I call one plus one thinking—where one plus one is actually greater than two. The job of the serving leader is to build a community where everyone feels they are part of the big picture.

I hope you think of yourself as a servant leader—but take it a step further and make sure you are taking the right actions to actively serve your people. Be present and focus on each person individually, accept people’s strengths and help them overcome weaknesses, and encourage creativity by inviting everyone to share their perspective. I guarantee that you’ll unleash talent and potential that will transform your direct reports, your team, and your organization. 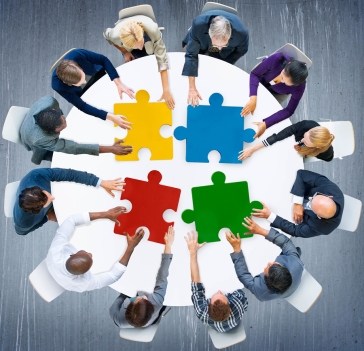 As a leader, do you create a safe and trusting environment where your people can express concerns and share information freely? That might be a difficult question for some of you to answer. In our new book, Collaboration Begins With You: Be a Silo Buster, my coauthors Jane Ripley and Eunice Parisi-Carew and I describe how to build trust and take responsibility for creating a culture of collaboration.

In the previous post I introduced the UNITE acronym to describe the five elements that every person must adopt to make collaboration a part of the corporate culture. We encourage everyone to Utilize differences; Nurture safety and trust; Involve others in crafting a clear purpose, values, and goals; Talk openly; and Empower themselves and others. I wrote about Utilizing differences in the last post and this time I want to share more about how to Nurture safety and trust.

The best way to start is by being a role model for the behavior you want to see in others. Share your own knowledge openly and encourage others to speak freely without fear of judgment. Welcome people’s ideas and truly give them consideration before making a decision. Give and receive feedback without judgment and be accessible, authentic, and dependable.

To build trust with your team, view mistakes and failures as learning opportunities and discuss them openly. If you punish people for making mistakes, they will learn quickly to cover them up and you’ll miss important opportunities to avoid future mishaps. I’ve found that some of the greatest learning moments happen when mistakes are shared and discussed. Encouraging these kinds of discussions will lead to smoother processes, improved communication, and innovative thinking.

To help people feel safe in their working environment, be transparent when making decisions. Make sure people know their role and what a good job looks like, and give them freedom to experiment. If people know what is expected of them and the boundaries they can operate in, they will flourish.

Rate yourself as a leader who Nurtures safety and trust by asking yourself these questions.

If you answered yes to most of the questions, you probably have created a safe and trusting environment for your people. But pay attention to where you answered no so that you can continue to build a strong culture of collaboration, because as the book title says—collaboration begins with you.

To learn more about Collaboration Begins With You: Be a Silo Buster, visit the book homepage where you can download the first chapter.

In our new book, Collaboration Begins with You: Be a Silo Buster, my coauthors Jane Ripley, Eunice Parisi-Carew, and I explain the importance of building a culture of collaboration in your organization. Believing true collaboration is the responsibility of every individual, we define five elements each person must consider when accepting their specific role in helping to create that culture.

The UNITE acronym makes these elements easy to remember. Every collaborative leader must be able to Utilize differences; Nurture safety and trust; Involve others in crafting a clear purpose, values, and goals; Talk openly; and Empower themselves and others. Let’s take a closer look at the importance of utilizing differences.

Many people think if a group working together allows differing viewpoints it might create disagreement, which would be a bad thing. However, we believe conflict in collaborative groups is good—as long as discussions stay focused on the issues and disagreements don’t get personal. In fact, conflict can be the basis for breakthrough thinking that leads to revolutionary ideas.

Ask yourself these questions to see if you are a collaborator who makes the most of people’s differences:

If you answered yes to most of these questions, congratulations! You are well on your way to being a first-class collaborator who embraces diverse points of view within your work group. If you answered no to any of them, you know where to begin your journey to effective collaboration.

Organizations operating in today’s global economy have workforces comprising multiple generations with diverse backgrounds, perspectives, and temperaments. This guarantees significant disparity among people in almost every work group. The ability to utilize these differences for the greater good will determine the success or failure of your project—and possibly your company. Remember—collaboration begins with you!

Note: Collaboration Begins with You: Be a Silo Buster will be released October 12. Place your pre-order at www.Amazon.com.