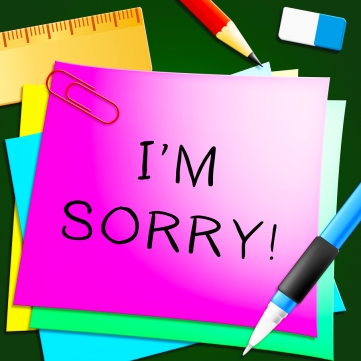 Time and again, I’ve noticed that many of us have a lot of trouble apologizing. I’ve observed this in myself, as well. One reason it’s hard to take responsibility for our bad behavior is because doing wrong is inconsistent with our view of ourselves as ethical people. As a result, many of us avoid apologies like the plague.

What I’ve realized is that difficulties apologizing are tied to pride and ego. When we sincerely apologize, we are taking our egos out of the equation and being honest. We are practicing integrity when we apologize, because we are acknowledging that what we did or failed to do is inconsistent with who we want to be.

Despite the challenges they pose to our egos, sincere apologies are one of the most powerful tools we have. In fact, the act of apologizing is so powerful that Margret McBride and I wrote a book about it called The Fourth Secret of the One Minute Manager.

You might wonder why I don’t say that you should ask for forgiveness at the end of a One Minute Apology. It’s because I don’t think you should. Asking for forgiveness puts the person you’ve hurt or wronged under pressure to decide whether or not to forgive you. With a One Minute Apology, you keep the responsibility in your court. That’s why you end the apology with a commitment to change your behavior instead.

One of the greatest advantages of apologizing is that it gives you an opportunity for completion with that relationship. When you’ve done something wrong and haven’t dealt with it, it hangs over you and drains your energy. When you deal with it, you get closure.

An example from my own life involves Annie, a woman who was Margie’s sorority sister and a classmate of mine from Cornell. Her daughter, who also attended Cornell, was just fabulous. A number of years ago, Annie’s daughter was killed while jogging; they found her body up in the hills.

After that happened, I meant to reach out to Annie and her husband, but I just never did. Even though I was really taken aback by their daughter’s death, I didn’t send them any flowers or a note. I was too busy and never got around to doing or saying anything—and that always bugged me.

A few years later, I saw Annie out walking, so I crossed the street, went up to her, and gave her a big hug. Then I said, “Annie, I just want to apologize to you. When your daughter died, I meant to reach out to you. That was such an awful thing and she was such a great kid. But I didn’t and I feel really badly that I didn’t.” She got teary-eyed and said that she so appreciated my apology. She had often wondered why she hadn’t heard from me. I think we both felt completed.

So the next time something you’ve done wrong is hanging over you, don’t let it eat at you. Challenge yourself to take ownership and see firsthand how powerful a One Minute Apology can be.