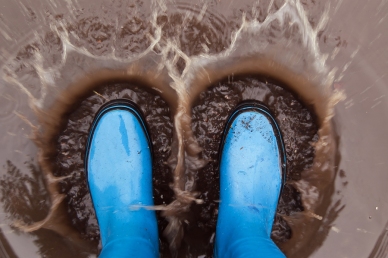 I love the saying “A river without banks is a large puddle.” The banks permit the river to flow and give it direction. In my last post I explained that the visionary part of servant leadership is about providing clear direction. If people don’t have a compelling vision to serve, they can’t work toward a common goal. They can’t keep organizational energy flowing in a consistent direction.

Walt Disney’s picture of the future was expressed in the charge he gave every cast member: “Keep the same smile on people’s faces when they leave the park as when they entered.” Disney didn’t care whether a guest was in the park two hours or ten hours. He just wanted to keep them smiling. After all, they were in the happiness business. A picture of the future should focus on the end result, not the process of getting there.

The Disney theme parks have four clear, rank ordered values: safety, courtesy, the show, and efficiency. Why is safety the highest ranked value? Walt Disney knew that if a guest was carried out of one of his parks on a stretcher, they would not have the same smile on their face leaving the park as they had when they entered.

The second ranked value, courtesy, is all about the friendly attitude you expect at a Disney park. Why is it important to know that it’s the number two value? Suppose one of the Disney cast members is answering a guest question in a friendly, courteous manner, and he hears a scream that’s not coming from a roller coaster. If that cast member wants to act according to the park’s rank ordered values, he will excuse himself as quickly and politely as possible and race toward the scream. Why? Because the number one value just called. If the values were not rank ordered and the cast member was enjoying his interaction with the guest, he might say, “They’re always yelling at the park,” and not move in the direction of the scream. Later, somebody could come to that cast member and say, “You were the closest to the scream. Why didn’t you move?” The response could be, “I was dealing with our courtesy value.” Life is a series of value conflicts. There will be times when you can’t act on two values at the same time.

Every organization should have a compelling vision that includes a significant purpose, a picture of the future, and clear values. These three elements will provide the strategic direction people need on a daily basis to perform at the highest level and secure organizational success.

One thought on “The Visionary Role of the Servant Leader”